Roundup of some other posts on the Gospel of Jesus's Wife 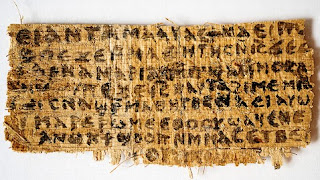 I wanted to throw some more links out there to follow up from my post the other day. Some of these I've either found through searching or they've come through some of my RSS feeds. In my opinion, this great find will be all but forgotten within a few years. Does anyone remember the Gospel of Judas controversy from just 6 years ago? And what has become of that now?

Below are some links you should check out (from people far more knowledgeable in these matters than I).

I have attempted to understand the reaction of various persons within the coptological community here at the International Association of Coptic studies conference.  My initial perception is that those who specialize in Nag Hammadi and early manuscripts are split with almost two-thirds (earlier four-fifths) being extremely skeptical about the manuscript’s authenticity and one-third (earlier one-fifth) is essentially convinced that the fragment is a fake.  I have not met anyone who supports its authenticity, although I do not doubt that there must be some.

So clearly, Bagnall thinks that current shape of the fragment is modern, and that it was deliberately forced into its current shape 'to maximize profit'.

Is it too far-fetched to suggest that the lamentable loss of the words immediately following the famed words 'My wife' might not have been accidental, but perhaps made in order 'to maximize profit'?

Even Professor King did not suggest that this fragment means that Jesus had a wife (and she is not known for her conservative views!): “its possible date of composition in the second half of the second century argues against its value as evidence for the life of the historical Jesus.” If it goes back to a second-century tradition, we must keep in mind that there is a world of difference between first-century, apostolic Christianity and the various spin-off groups that rose after that early period.

The Gospel of Jesus’s Wife? When Sensationalism Masquerades as Scholarship - Albert Mohler

This is sensationalism masquerading as scholarship. One British newspaper noted that the claims about a married Jesus seemed more worthy of fans of Dan Brown’s fictional work, The Da Vinci Code than “real-life Harvard professors.” If the fragment is authenticated, the existence of this little document will be of interest to historians of the era, but it is insanity to make the claims now running through the media.

Was Jesus Married? Nothing to See Here. - R. Scott Clark

So, we cannot be surprised that Karen King has found a fourth-century fragment from Alexandria. Of course she did! There were lots of folk running about in the 4th century, many of them Alexandria, teaching all many of crazy things (e.g., Jesus had a wife).

Posted by Chris Whisonant at Friday, September 21, 2012 No comments:

The Gospel of Jesus's Wife

It seems that every year or so there is a newly discovered fragment that will undermine core tenets of Christianity. Yesterday, there was an announcement that a parchment was found in which it is revealed Jesus had a wife. I would like to discuss this in a couple of ways.

If you will read the PDF published by Dr. Karen King, the transcription (followed by the translation and interpretation) can be found starting on page 13. What we have here is 16 total lines of broken Coptic text. Five of these lines only contain 5 intelligible words. This is not a complete document by a long shot. It is the 4th and 5th lines of the text that concerns us where we read "Jesus said to them, 'My wife...she will be able to be my discipe.." To her credit, Dr. King does state that this does not prove that Jesus was indeed married. She does state the importance of this fragment on page 22 of the PDF:


The importance of the Gospel of Jesus’s Wife lies in supplying a new voice within the diverse chorus of early Christian traditions about Jesus that documents that some Christians depicted Jesus as married.

First of all, theologically and doctrinally, what does this mean? "The importance" is that this is an old document (from the 4th Century) and Jesus says something about "my wife". The ABC News article also states the following:


The discovery, if it is validated, could have major implications for the Christian faith. The belief that Jesus was not married is one reason priests in the Catholic Church must remain celibate and are not allowed to marry. It could also have implications for women’s roles in the church, as it would mean Jesus had a female disciple.

I will not get into the Catholic doctrine of celibacy for priests here, but with regards to female disciples, ABC News should, frankly, go read their Bibles. For example Acts 6:1-2 demonstrates that "the twelve" disciples gathered the full number of the disciples together. One has to be careful to differentiate between the 12 called disciples of Jesus and the fact that all of His followers are referred to as disciples. If ABC News means the former, then they are flat out wrong because The Twelve were specifically named in Scriptures. If they mean the former, that's not anything that has "implications for women's roles" since every believer is a disciple. But, I believe you can put the pieces together with regards to the intent of some regarding this fragment.

Which brings me to the second way that we, as believers, should think about this fragment - practically and apologetically. Consider this; there are literally thousands of parchments that are older than this fragment. Many of them are also complete documents (i.e. complete manuscripts of the various books of the Bible). The vast manuscript evidence we have make no mention that Jesus would have been married or that he had a "13th Disciple" who was a female. Yet, we have those today who would rather take the word of an incomplete parchment over that of more ancient and reliable texts. This is nothing new, but it should give us hope knowing that people today still want to know truth. And we should be willing to tell them the truth that God has revealed to us in the Bible. While this fragment is indeed speaking of Jesus Christ, that does not mean that it is some special knowledge or revelation that has been withheld from us for all these years. Rather, it is a gnostic gospel likely written by someone who wanted to undermine Christianity in some way or to inject their own skewed beliefs into it with the hopes that it would take root.

Also, check out Aaron Earl's post on the matter with other links. We were discussing this last night, and I held off reading his post today until I completed this post. I like one of his points that Jesus does have a bride - the Church!
Posted by Chris Whisonant at Wednesday, September 19, 2012 No comments:

A thought from 150 years ago for today's church

Have you ever stumbled on a great book when you haven't even been looking for one? Not long ago I saw that a book became free for the Kindle (via Gospel eBooks) and I downloaded it. The book is "Theology Drives Methodology: Conversion in the Theology of Charles Finney and John Nevin" by Karl Dahlfred. Although I've highlighted almost 20 sections and I'm only halfway through, I read something Thursday that I knew I should blog.

During the discussion of John Williamson Nevin's theology of salvation, Dahlfred offers this quote from Nevin (from his book "The Anxious Bench"):


The Bench makes conversion "to be the all in all of the Gospel economy,
and the development of the Christian life subsequently a mere
secondary interest" that might be "safely left... to take care of
itself."

Although "The Bench" is not something specifically used in churches today, the reasoning behind its use by Charles Finney is still widely promoted within churches today. Nevin is pointing out here the extreme error of focusing so much on the conversion event in a Christian's life without the church following through with true development of a believer's Christian walk.

This is exactly what the author of Hebrews wrote about in Hebrews 5:11-14 and Hebrews 6:1. Our savior, Jesus Christ, did not call us to make converts. But, rather, he has called us to make disciples. In Jesus' day, disciples would basically sit at the feet of their Rabbi and soak in his teachings in order to follow them.

Further, this is not just something that is an academic matter, but it has many practical implications for us. You can actually find popular pastors today saying things along the lines that they should not have to spiritually develop their flock (or even worse that they shouldn't personally take an interest in "pastoring" them - Nevin speaks about that as well) but that Christians should just be doing that on their own. This is the "taking care of itself" that Nevin wrote about above. Dahlfred goes further to point out that Finney's "Systematic Theology" does not even contain a section on The Church or her functions!

Church has become a numbers game (one could argue that much of that ties back to Finney), but that should not be the case. A great man I know says that we don't come to the church, but we come as the church! What are we missing if we only go to church for some good music or preaching? Please, don't allow your sanctification to be something that's "merely secondary interest."
Posted by Chris Whisonant at Friday, September 07, 2012 No comments: