But not Curious Mitch. In my thread asking for new bloggers, Mitch Cohen pointed me to his blog (mostly related to Quickr and Sametime). It's been a good read and he's fairly active. And since I've been working with Quickr lately, it's very timely.

So, after upgrading a server from 5.0.2b to 7.0.2FP2 this week (the clients were 4.6.7!), I did a lot of cleanup and added the LocalDomainAdmins group. I know for a fact that at one point I renamed in ACLs the old admin groups as well. I was also able yesterday to delete a good many old accounts.

Well today we were unable to delete accounts. So I did the usual ACL checks on the NAB and even explicitly added my account. Everything was cool, but I got an error that I wasn't authorized to perform the operation (clicking the "Delete Person" button).

No errors in log. Nothing on the console. Nothing in DDM. Nothing but an error. So I go into Full Access Administration. Nothing. So then I decided to check Admin4.nsf ACL. Sure enough, LocalDomainAdmins was NOT in there! I know it was because I was looking through catalog.nsf verifying things yesterday.

But, I was then able to delete an account. And I also added LocalDomainAdmins to every db....

More Than Meets The Eye!

Just got back from catching Transformers!!! Excellent movie... You have to see it in the theater, though, unless you have a big screen tv - but that may not do it justice either. The AV sequencing was amazing. It was a great unwinding for today...

If you want a ringtone, check out this page with some transformers mp3 tones. The "transforming sound.mp3" is a cool one for a message alert... :)
Posted by Chris Whisonant at Tuesday, July 24, 2007 No comments:

Generally with the Linux NSD files you will find the "Input arguments" line with the -crashpid and -crashtid. For example:

Of course you can find out which process is running by searching for just the pid number compared to the processes listed in the Notes Process Summary section:

So we've already determined that the http task was the crashing process. But here's another handy search:

Just put in the crashpid# then a colon followed by the crashtid# (Note that if the tid# is 3 digits that there should be 1 space between the colon and the tid. If the tid is 2 digits there would be two spaces - basically it's expecting up to 4 digits for the tid# with the leading digits being spaces instead of zeroes). This should help out in finding a db that may have caused it.

When that string is found, then you know that you're looking at the actual crash thread for the crashing process. For instance, you may see the following section:

So, with this tip, you are able to determine that something in the Path/DB.nsf application was the cause of the server crash.

I've been thinking and it's been a while since I've seen some new faces in the Lotus Blogging community...

The first is Michael Smelser. He's a colleague of mine here at Lotus 911 and makes the 5th Blogger here!! It looks like Mike may be focusing on dev - looking forward to it.

Also, let me introduce you to Bryan Kuhn. He's a former colleague of mine and he's been updating his blog a little more lately. Bryan focuses on BES and Dev (though not at the same time) at his blog.

Also, Ed Brill (and others) linked to two new sites in the past week - LotusViralMarketing.com and FastNSF.com, so check em out if you haven't already.

Anyone else out there have a new blog and just starting up? Would love to hear from you!
Posted by Chris Whisonant at Wednesday, July 18, 2007 No comments:

OK, so I've been tagged to list my favorite 5 album openers. Hmmmmm....

Virtue and Vice - Holy Soldier's Last Train - 1992 - Awesome opener for H5 dealing with the inner struggle of good and bad in us all. This is probably one of my all-time favorite albums too!

Welcome To The Jungle! - Guns 'N Roses Appetite For Destruction - 1987 - Not only was this the Side 1 Track 1, but it was Disc 1 for them too. Truly definitive song followed by other songs that are GnR!

OK, so I need to tag 5 others. Not sure who's been tagged (I've only seen Nathan and John's posts on this), so here we go. I'll even go outside the Notes community some to start this up for others... :) 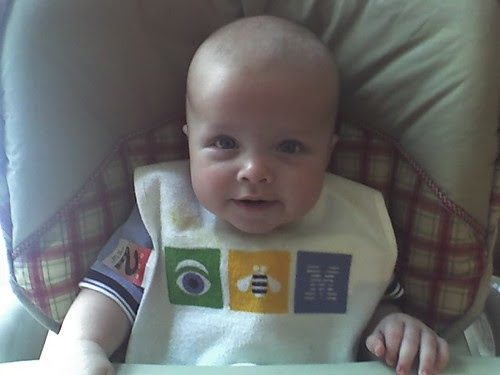 Just thought I'd share this pic of little OT wearing his IBM bib! Never too young to start, eh? :)

I like to dump this section of parameters into my Notes Client notes.ini file. It's all commented out and you can just remove the semi-colons as needed to enable more or additional logging. If you can think of any other options let me know, but this is a good base.

p.s. - I'm doing this as much for my record in case I need to debug a remote client I can just hit my blog for this reference... :)
Posted by Chris Whisonant at Thursday, July 12, 2007 No comments:

Me as a Simpsons Character

Since everyone else is doing it, here's what I guess I would look like...lol

Go here to get your own Simpsons avatar.
Posted by Chris Whisonant at Tuesday, July 10, 2007 No comments: