While reading God in the Dock: The Apologetics of C.S. Lewis by Roger Nicole, I stumbled on a wonderful quote by C.S. Lewis from The Screwtape Letters

"It does not matter how small the sins are, provided that their cumulative effect is to edge the man away from the Light and into the Nothing. Murder is no better than cards if cards can do the trick. Indeed, the safest road to Hell is the gradual one" (p. 56).

Wow, that is so true. Sometimes we think about the "big sins". Like the "Seven Deadly Sins" or the list of sins we see the Lord hates from Proverbs 6:16–19, etc... But Lewis tells us that if even the small things in our lives are dragging us from the Light of Christ that the net effect may be the same on our souls. I do not believe I have The Screwtape Letters, I should probably pick it up sometime...
Posted by Chris Whisonant at Friday, May 30, 2008 No comments:

Yep, here is what my guitar hero rig looks like... :) But it probably cost a lot more than a game, right Jen? 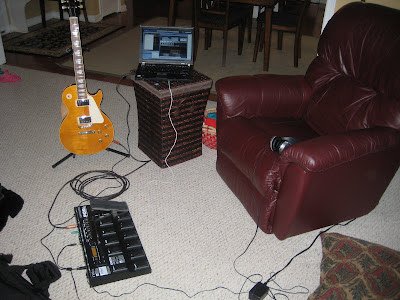 Just another reason to take a pic of Blondie! By the way, I just picked up the Line 6 PodXT Live in the picture. Got a great deal on it on eBay. I should have bought it a few years ago, but my Korg AX1500G was sufficient. I have always been impressed with the Line 6 stuff, so I finally broke down and got one.
Posted by Chris Whisonant at Sunday, May 25, 2008 No comments:

Let me know if you still think it was a hoax

This one's for all of the conspiracy theorists out there. At the link, you can watch videos of this test performed in 1988, but here are the results. 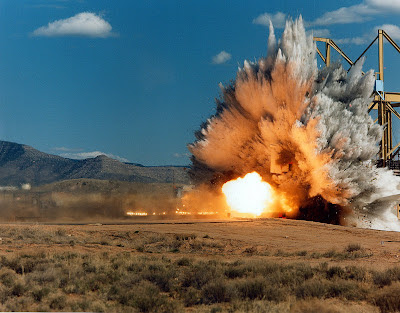 And just to make sure I'm clear - there are many who still believe that the plane that crashed into the Pentagon on 9/11 wasn't a plane at all. This is because they cite that there wasn't any debris left. Well, these videos and tests from 1988 prove that if a plane crashes into a concrete object that no debris will be left. So if for some reason you still don't believe it was a plane, then there's nothing else I can say to you...

Here's some info from the Sandia National Labs site:

The purpose of the test was to determine the impact force, versus time, due to the impact, of a complete F-4 Phantom — including both engines — onto a massive, essentially rigid reinforced concrete target (3.66 meters thick). Previous tests used F-4 engines at similar speeds. The test was not intended to demonstrate the performance (survivability) of any particular type of concrete structure to aircraft impact. The impact occurred at the nominal velocity of 215 meters per second (about 480 mph). The mass of the jet fuel was simulated by water; the effects of fire following such a collision was not a part of the test. The test established that the major impact force was from the engines. The test was performed by Sandia National Laboratories under terms of a contract with the Muto Institute of Structural Mechanics, Inc., of Tokyo.

Posted by Chris Whisonant at Wednesday, May 21, 2008 No comments:

Yes, I've been a slack blogger - both here and at BleedYellow... For those who really want to know what happens in the Nut House, you can keep up with my wife's blog - there are some great pics of the family this weekend!! She does much better at keeping everyone up to speed. It's been a little busy lately, and we do appreciate all of the thoughts and prayers for Jen's mom. We're all taking it a day at a time now with her on chemo. She has some ups and downs, but we're grateful and thankful that this weekend was one of ups.

Oh, here's one of me and the kiddos: 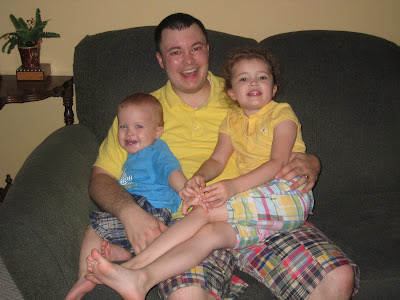 The Imagination of C.S. Lewis

There is a great article over at the Ligonier Ministries blog by Leland Ryken titled The Imagination of C.S. Lewis. This article explores how the stories came about for Lewis and how they took on their Christian meaning. It's quite amazing actually:

Lewis famously said that "all my seven Narnian books...began with pictures in my head. At first they were not a story, just pictures." Thus The Lion, the Witch, and the Wardrobe "began with a picture of Faun carrying an umbrella and parcels in a snowy wood." Just as we are recovering from the shock of that revelation, Lewis adds, "This picture had been in my mind since I was about sixteen. Then one day, when I was about forty, I said to myself: 'Let's try to make a story about it.'"

Just in case we might think that we cannot possibly have heard things correctly, Lewis also gave us another passage of similar import -- only more shocking. In countering the assumption of some of his readers that he "began by asking myself how I could say something about Christianity to children," Lewis claimed that "at first there wasn't even anything Christian about [the stories]."

The order of composition suggests an order of reading. If we follow the lead of Lewis himself, a major lesson we can learn from the Narnian stories is that they are first of all stories -- adventure stories, fantasy stories, children's stories. These narrative features are not simply "a disguise for something more 'adult'."

There is an image posted at the article that details the Biblical themes of the stories - basically they are a walk through the Biblical narrative: 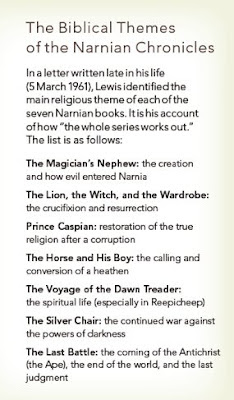