I've added the eBibleicious script to my blog. This means that any scripture references will automatically be hyperlinked. I have chosen to use the ESV Translation that will display in a window when you hover the mouse. Check out these:

I was able to make it to the Lotusphere Comes To You event hosted by Lotus 911 yesterday in Raleigh, NC. I was able to meet Nathan and Tim. During the morning session, there was a meeting/revival being held by American Baptist churches. It's a historically black denomination, so there was some soul filled (and filling) gospel music going on next door during the morning sessions. Good stuff!

The Lotus information was really good as well. I'm guessing there were about 40-50 people there in the morning session. Nathan asked how many of them had downloaded the Notes 8 client and maybe a dozen raised their hands! This was great - especially compared to the ONE person he said raised a hand at the Hartford event earlier in the week. As an admin, there is some great stuff coming in Domino 8 and Domino "Next". In Domino "Next", you can get rid of Notes ID files if you wish and potentially even authenticate against AD or LDAP.

I had to straighten Nathan out once after a session. There were a couple of ladies who were not Notes customers and Nathan confused them by referring to a Notes "Application" as a "Database"! What were you thinking?!? :)

Quickr integration is going to be excellent - check out this video.

Yesterday Emma Grace and I got out her soccer ball. She kept running around saying "I'm a soccer monster." I had no clue where she got that, but after googling the phrase, it turns out it's from The Backyardigans. We had a blast!!

Posted by Chris Whisonant at Monday, April 23, 2007 No comments:

Unresponsive Sametime Server And Its Effect On Other Servers

Right when we were about to leave yesterday, we got two helpdesk calls. One was from a user who couldn't open a document in a web app. The second was from a user who couldn't open DWA. So, we asked if it was OK for me to look at the code for the app (there was what appeared to be a JS error from the onload event) and we had the DWA user login to the old school webmail. Two random calls, right?

When I got home I was paged with a problem that nobody could get into DWA. So I tried and it didn't work for me either. Just a white screen trying to load. The first rule of server troubleshooting is to check the console. So, I did this and I saw this message sporadically: "Error connecting to server IM/ORG: Remote system no longer responding". Well, I know that DWA has integrated chat and I recalled that as my Notes 8 Basic was shutting down at the office the "Connecting..." message was in my Sametime status. I didn't think anything of it at the time - I thought it was just because I was closing the client. But at home I checked the console of the Sametime server. Everything seemed fine. All of the tasks were running, but we couldn't talk to it from other servers. So I shut down that Domino partition and viola!, DWA began working. I fired Sametime back up and it was all good.

I later recalled that the web app also uses STLinks to allow chatting with the document owner. So, this unresponsive Sametime server caused DWA to fail as well as web apps using STLinks. Gotta love it!
Posted by Chris Whisonant at Wednesday, April 18, 2007 No comments:

In case you haven't heard, this may keep some of you BES admins from troubleshooting today. Last night the entire BES infrastructure went down...

And it's still down as of this posting! At least it appears to be for us.
Posted by Chris Whisonant at Wednesday, April 18, 2007 No comments:

A Milestone for Ollie

Speaking of Ollie, here's a recent picture of him doing what he does best... 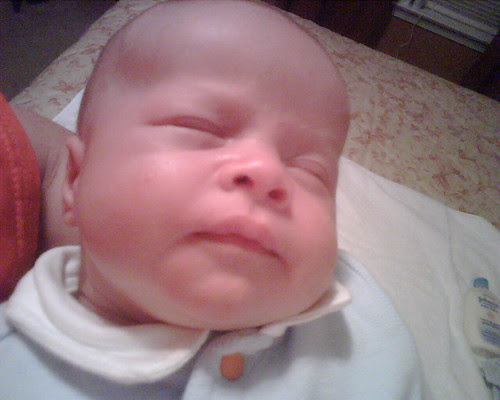 What's Up In Lotus Land?

It's been a while since I've posted anything about Lotus. We're actually not doing a lot of exciting stuff with Lotus right now - as far as projects go. Our main project is just System i-related. We're migrating our user base from 5250 to Webfacing. Should be loads of fun! It will be a big adjustment for the users. We're running very well on our new System i - great performance!! Once we get all System i users to the web, we will move them into an LPAR on the same box as our Domino server.

I've been using the Notes 8 client all the time. Even NOMAD (though it's not "supported" yet, you can manually run nlnotes.exe as long as you make sure the 3rd line in the notes.ini points to the proper drive letter).

I've posted 17 main topics in the Beta forum. That's about the 7th most main topic posts from what I can count. There are no gotchas for my environment yet. Though I'm waiting on more feedback on a line that crashes the client when opening a datab....umm, application, and I've been assured that an install issue will be corrected. There is a lot of great feedback in the forum if you haven't been able to keep in the loop.

A few cool things I've seen in 8 are:
- Tabbed chatting with embedded Sametime 7.5.1 (should be in the connect client build too). Some known ui issues with it, but it works - tabbed chatting was one of the first things I thought would have been in 7.5.
- Mail template - beautiful!
- DWA 8 - the UI parity with the mail template is much better. It looks a lot more like the Notes client than previous iterations.
- Productivity Tools - these are very nice to have right from the client. Hopefully in the 8.0.1 timeframe they will be more of the Office killer that they have the potential to become. There are a few things that were already being addressed before Beta 2 was even released.
- ALT-F-T-D ('nuff said, right Nathan?) OK, so this isn't "cool", but leave this keyboard combination to the professionals! It's not your mother's ALT-F-T-D
- I also love that the spare memory in my computer is now being more fully utilized! ;)
Posted by Chris Whisonant at Tuesday, April 17, 2007 No comments:

Looks like I need to get out west a little more. In June I'll be making it to Boston, so Massachusetts will be checked off... And I have a feeling that I may make it to Texas sometime to visit friends. Well, my wife will make it sometime probably.

create your own personalized map of the USA
or write about it on the open travel guide
Posted by Chris Whisonant at Friday, April 13, 2007 No comments:

If I Was There

One of my favorite Tourniquet songs is "If I Was There". I always wanted to perform it in church with a video or images from Good Friday. Back in college, I sang this song and played the electric lead at the end while the other BSU worship leader played the acoustic. Today I stumbled upon a moving YouTube video with footage from The Passion of The Christ.

Posted by Chris Whisonant at Thursday, April 12, 2007 No comments:

Chris Said What I Was About To Post This Morning...

Trackback to Chris Byrne's post Should Imus Be Fired? He said basically what I have been looking for time to post. Specifically, being so close to North Carolina, I want to know when the demagogues will be coming back to apologize to the exonerated Duke students. Now I don't need to find much time to post because Chris pretty much said what I feel and more. Good post!
Posted by Chris Whisonant at Thursday, April 12, 2007 No comments:

People Who Went To My College

I thought I would fill you in on a couple of people from my Alma Mater - North Greenville University (it was a College when I graduated in 2000). The first two have made a bit of news recently and the last few are more personal...

First, Chris Sligh, of this season's American Idol attended North Greenville. We wish him the best in his musical career. I'm sure that American Idol will be a huge step in his career.

Second, and of greater global importance than a singer (no offense, Chris), is Mike McConnell. Who is this? He's the man who, on February 20, was sworn in by President Bush as the second ever Director of National Intelligence. Under the Clinton Administration, he was director of the NSA. Of course, he attended NGC in the 60's (64 I think) when it was a Junior College.

Third are Jake and Jen Wade. We all attended NGC at the same time but were only acquaintances (and it was before they were "Jake and Jen" too). On April 1, Jen went to be stationed with Jake - who joined the Army last year. My wife and I were able to become really great friends with them when we started going to church with them in February, 2005. We will miss them deeply, but we know that God has a great plan for them. It will be tough being so far away from great friends (especially for my wife and Jen), but our friendship will be stronger than the miles.

Finally, Jon Barbee was my suite-mate for 2 years at NGC. He's just accepted the call as a youth pastor at a church here in Rock Hill. So it will be great to have him and his wife Brandy (also an alum) move up here! He started on April 1.

That's all for now!
Posted by Chris Whisonant at Monday, April 09, 2007 No comments:

We moved our production mail, application, and Sametime environment from our iSeries 820 to a new System i 570+ (again). Let's just say that scheduled agents that took about 7 minutes to run with no load now take 50 seconds to run under full load on a Monday... :)
Posted by Chris Whisonant at Monday, April 09, 2007 No comments:

Sorry pal, you opened yourself up to this one. I would like to introduce the next in a series of Moody photos... Except this one didn't require photshopping!
I now present to you... Chris Moody with his manbag (it's even pink!):

Posted by Chris Whisonant at Wednesday, April 04, 2007 No comments: 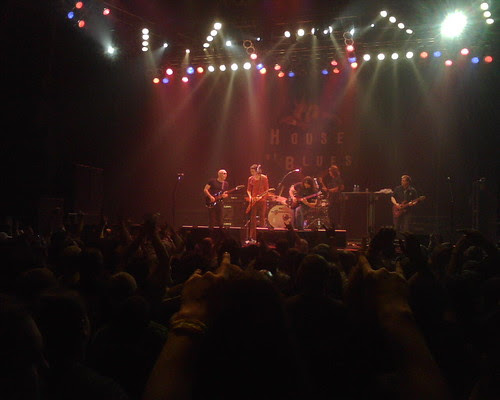 Unfortunately, I couldn't take my camera in, but I did have my Pearl! So, here are some pics. These were the best of the best. This picture is of Satch, Gilbert, and Petrucci jamming in their collaborative set. It was an amazing show!! Mike Portnoy played drums for Petrucci and Dave LaRue was on bass for Petrucci and Satch. I think Petrucci said it best when he introduced LaRue and Portnoy - even though there are only three of them on stage, LaRue and Portnoy made it sound like a train was coming through! When Satch played "Satch Boogie" a guy beside me said that he's been waiting 20 years to hear that song live! So it sounds like Satch hasn't come to this area in a LONG time - I'm so glad I was able to witness this! Great show guys!!

The entire photo set can be found here.

Posted by Chris Whisonant at Monday, April 02, 2007 No comments: