While listening to some old Toad the Wet Sprocket music this yesterday morning, I heard this line from "Nanci": "I can't believe you - you bend your words like Uri Geller's spoons" 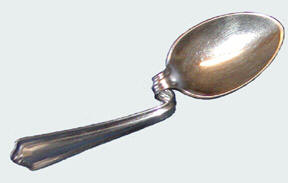 This got me thinking about the new Recovery.gov website. At the bottom left of the main page, we see this chart: This leads many to believe that this colossal spending bill is around 1/3 "tax relief". Actually, we should all take a look at this a little differently. First of all, here's a pie graph representation of the bill using The Administration's numbers from above: 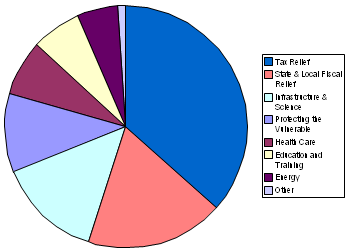 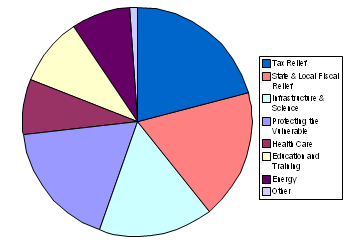 As you can see, it's much more evenly distributed. But without the words (and numbers) having been bent like the spoon above, the public perception of the bill may be drastically shifted. Certainly we're still seeing a big chunk as pure "tax relief" [that I understand much of which will be allocated to taxpayers who should be seeing around $13 per week "extra" on our checks ($400/year single, $800/year couple)]. I won't go into the arguments for or against that here. But one of the other things about the "tax relief" is that $61,000,000,000.00 (yes, Billion) will be going to "Protecting the Vulnerable" (defined here as "low-income and vulnerable households"). This is in addition to the other $81 Billion dedicated to this group. Am I saying that we as people should not be helping out those less fortunate? Far from it! But, monetarily speaking, we should not be calling part of this "tax relief" because many of those people do not even pay taxes. It is estimated that $264 Billion of this spending bill will be welfare spending in some form or another. Sadly, this will be undoing a lot of what President Clinton changed in regards to welfare. (Did I just say it was sad to undo something President Clinton did?!?)

You may not agree that President Obama is bending spoons with his rhetoric, but it is pretty plain to see that he wants people to believe that this is one big "tax relief" +spending bill. I hope you do not get pulled into thinking that or that Republicans should just be onboard with it because it has tax cuts. A tax cut does not a conservative make... (nor does being a Republican mean one is a conservative).

Here's a nice quote from the "Tooth Fairy Economics" article:

"We should not want to "stimulate" an economy based on debt and
overconsumption back into existence. We should want to restructure it
along sustainable lines."

Think about that. Our leaders really do think that this version of our economy is what needs to be revived. It's not! We do need to seriously reconsider what we're doing. For one, the FairTax is a good start as I've said before. A bad idea is spending another $275 Billion to help with mortgages. Even if this bill passes, I've heard estimates that even 40% of those affected won't even be able to pay their mortgages if the interest rates are reduced to 2% on their loans. That estimate can be heard in this video.

Posted by Chris Whisonant at Friday, February 20, 2009 No comments: